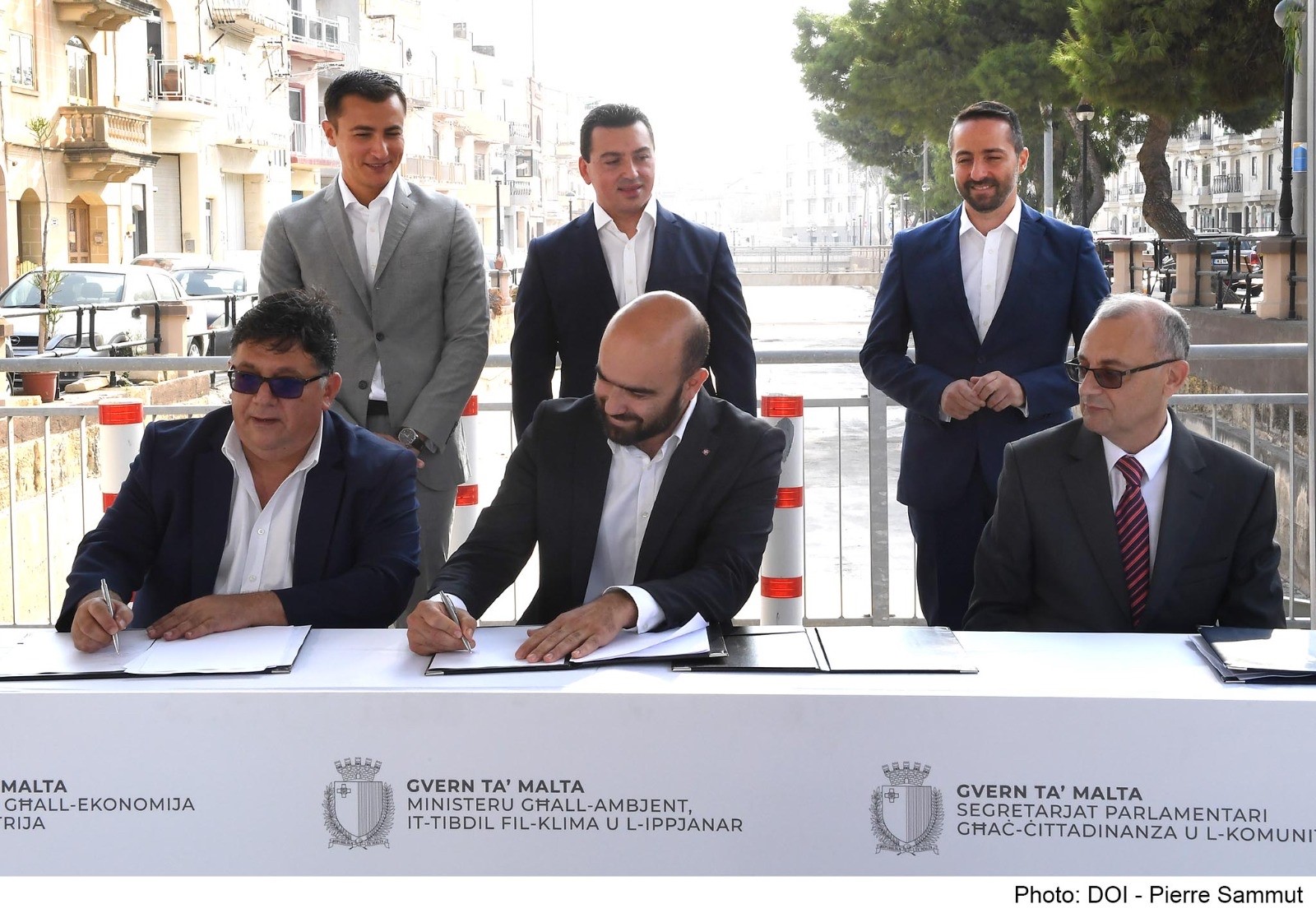 The locality of Qormi will be benefitting from a new urban greening project through an investment of a million euro from the National Development and Social Fund (NDSF).

This was announced by Minister for the Economy and Industry Silvio Schembri, Minister for the Environment, Climate Change and Planning Aaron Farrugia and Parliamentary Secretary for Citizenship and Communities Alex Muscat during a press conference on site.

During this event, an agreement was also signed between the Lands Authority and GreenServ so that this project and others like it can be carried out.

This project will be transforming part of the stormwater culvert into a space that can be enjoyed by the residents. Through the planting of trees and aromatic plants, a new space will be created which, in addition to greening this busy area, will also provide shade for the number of benches that will be installed. A 200 metre running track will also be created, which will be around the perimeter and will be isolated from the road by the trees that will be planted. Accessibility will be facilitated both for residents who want to access the surrounding shops, as well as for cars to cross to Valley Road. A small street-level car park will also be introduced, which will increase the parking spaces in this area.

Minister Aaron Farrugia said that this is another project led by GreenServ that will be creating an open and green space in an area synonymous with traffic, with the aim of improving the quality of life for residents living in this urban area, as well as to promote sustainable lifestyles. “As in the first nine years of the present government, the largest investment in the country was — as expected — in our country’s infrastructure. Now it is time for the government to inject an unprecedented investment into the greenification of our country, with the same intensity. The Budget that will be presented in the coming days shall usher in this new era,” Minister Farrugia said.

Minister for the Economy and Industry Silvio Schembri said that the agreement will pave a new chapter for this area in Qormi, where for several years the residents have been facing serious challenges whenever it rained. “The fact that today we are about to announce this project to the residents of Qormi is definitely satisfying for me. I remember the residents of this area who, during a period of heavy rain, had suffered dire consequences when the water that was retained here had entered their homes. Since 10 years ago, I have worked to make a dream come true for these Qriema residents. In the wake of the suffering they have had to endure, they will now benefit from this amazing recreational project, well deserved for both this locality and its residents,” said Minister Schembri. The design incorporates a 200 metre running track, a parking area, a system for using rainwater to irrigate the vegetation, which will be planted and which was chosen to complement the climate in the area and, furthermore, it provides a recreational space beyond the bustling activity which characterises the area. “This is what we mean when we speak of an economy which will benefit all, an economy through which the successes we have achieved will enable us to invest in community projects for the benefit of the residents,” Minister Schembri said.

Parliamentary Secretary Alex Muscat said this was not an isolated project, but part of a series of projects that are being carried out through an NDSF investment. This fund protects the interests of Maltese and Gozitan citizens, and through it our country can enjoy better spaces and an improved quality of life. This particular project, with an investment of €4.5 million, is resulting in greening projects in Ħamrun, Mosta, Qormi and Żabbar. “Through this investment and collaboration with other entities, we are transforming spaces that were previously neglected or inaccessible into spaces that can be enjoyed by all,” the Parliamentary Secretary said.​​