The NDSF Raises over €595M since Its Inception 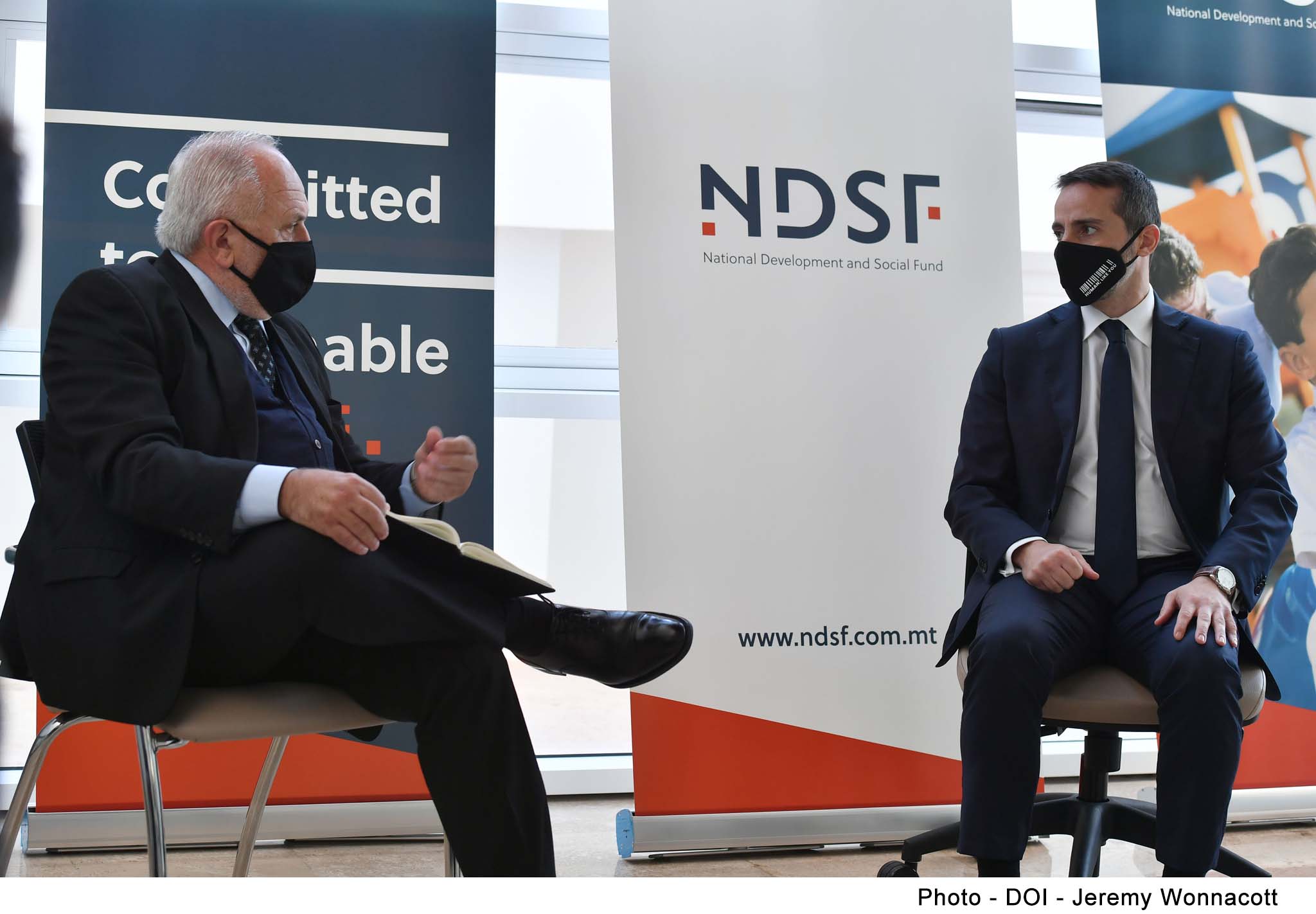 Press Release by the Parliamentary Secretariat for Citizenship and Communities

Various projects of national interest in which the National Development and Social Fund (NDSF) will be investing were discussed between the Parliamentary Secretary for Citizenship and Communities Alex Muscat and the NDSF’s Board of Governors during a meeting held at the at NDSF’s offices in Ħal Balzan.

NDSF will be investing in more national projects for the benefit of the whole community. Among these projects, the Parliamentary Secretary, and the NDSF’s Board of Governors Chairman Mr David Curmi confirmed the unprecedented investment in an innovative environmental ‘Green & Blue Infrastructure’ project for which financial assistance of around €4 million will be provided to carry out ‘urban greening’ projects in urban areas around Malta to improving the quality of life of the residents in the localities of Mosta, Ħamrun and Ħal Qormi.

The first board of Governors was appointed in September 2015. The NDSF is a Government Agency established on 6th January 2015 by virtue of the National Development and Social Fund (Establishment as an Agency) Order (S.L. 595.12).

The aim of the Agency is to contribute to major projects of national importance and to assist in projects and initiatives in the public interest, by inter alia promoting and supporting the advancement of education, research, innovation, justice and the rule of law, employment, and public health.

The Parliamentary Secretary said that this fund was established back in 2015 in order to make long-term social investments in the communities of our country, and took the opportunity to stress the need that the funds raised from foreign direct investment through the citizenship by investment programme continue to be spent wisely. Mr Muscat explained how this fund will be strengthened and expanded in order to continue contributing to various investments, to further the great good it is rendering in our communities. A few weeks ago, it was announced that Aġenzija Komunità Malta set up to administer all Maltese citizenship-related matters, of which is the Granting of Citizenship by Naturalisation for Exceptional Services by Direct Investment to attract the best investment and talent to our country.

Parliamentary Secretary Muscat emphasised that “We are committed that in the future, we will strive to keep shedding light on the valuable wealth this fund is enriching people’s lives with, not forgetting to mention the various projects and initiatives that have already been materialised in the past and from which our country beared the fruits.”

It is thanks to investments made through this fund that NGOs such as Caritas have benefited from a direct grant of €1.5M for the renovation and expansion of its facilities to keep welcoming and helping the vulnerable members of our society. Of the funds deposited in the NDSF, investment projects of around €91.5M were announced in the health, social housing, and sports sectors, among others. Investments of around €950,000 have been made in Mater Dei Hospital’s two catheterisation suites at its Cardiology Department, as well as the renovation of various health centres and clinics around Malta and Gozo in order to provide adequate health care to all.

At a press conference a few days ago, an agreement between the Government of Malta and Puttinu Cares Foundation was also announced, which could become a reality because Government was in a position to provide support through the NDSF. It was announced that when the property purchase agreement is signed, the fund will hand over €5M to Puttinu Cares Foundation along with other payments that will cover the use of the apartments by the families of the children requiring care in England.

During February this year, a work of art by the hand of artist Mattia Preti was purchased extending the National Collection. ‘Boethius and Philosophy’ falls under the curatorship of Heritage Malta. The acquisition of the opera for the work of art for €1.3M was financed by the NDSF. This acquisition showed the Government’s commitment to protecting and strengthening the artistic and cultural heritage of our country.

Mr Curmi ensured that the NDSF will continue to contribute to the development of better public services, to support enterprise and business in improving their competitiveness; and to promote research and development in matters conducive to the public interest. Mr Curmi reiterated that the aid provided by the investments made by the NDSF impact various aspects of one’s life and help various groups within the society.

The aim of the NDSF is also to help stakeholders to deliver social, employment and educational projects, and to foster initiatives that support reforms and better governance. The NDSF will also make sure that it continues to support measures for the improvement of the fairness and efficiency of justice, and to foster initiatives encouraging gender equality, prevention of discrimination, and respect for human rights.

The NDSF is committed to assist initiatives to provide for the social housing needs of the population and to combat social exclusion, and to sponsor initiatives for the improvement of health, health care and care for the elderly. “In our vision, we will continue to undertake initiatives for the benefit of future generations,” said Parliamentary Secretary Muscat.

The Parliamentary Secretary concluded by auguring great prospects for the Board of Governors, while thanking them for the valuable work carried out over the past years. “I am convinced that the NDSF’s Board of Governors have different capabilities to complement each other.”